Parler, the beleaguered social network advertised as a “free speech” alternative to Facebook and Twitter, has had a tough month. Apple and Google removed the Parler app from its stores, and Amazon blocked the platform from using its hosting services. Parler has since found a home in DDoS-Guard, a Russian digital infrastructure company. But now it appears DDoS-Guard is about to be relieved of more than two-thirds of the Internet address space the company leases to clients — including the Internet addresses currently occupied by Parler.

The pending disruption for DDoS-Guard and Parler comes compliments of Ron Guilmette, a researcher who has made it something of a personal mission to de-platform conspiracy theorist and far-right groups.

In October, a phone call from Guilmette to an Internet provider in Oregon was all it took to briefly sideline a vast network of sites tied to 8chan/8kun — a controversial online image board linked to several mass shootings — and QAnon, the far-right conspiracy theory which holds that a cabal of Satanic pedophiles is running a global child sex-trafficking ring and plotting against President Donald Trump. As a result, those QAnon and 8chan sites also ultimately ended up in the arms of DDoS-Guard.

Much like Internet infrastructure firm CloudFlare, DDoS-Guard typically doesn’t host sites directly but instead acts as a go-between to simultaneously keep the real Internet addresses of its clients confidential and to protect them from crippling Distributed Denial-of-Service (DDoS) attacks.

In studying the more than 11,000 Internet addresses assigned to those two companies, Guilmette found that approximately 66 percent of them were doled out to the Belize entity by LACNIC, the regional Internet registry for the Latin American and Caribbean regions.

Suspecting that DDoS-Guard incorporated in Belize on paper just to get huge swaths of IP addresses that are supposed to be given only to entities with a physical presence in the region, Guilmette filed a complaint with the Internet registry about his suspicions back in November.

Guilmette said LACNIC told him it would investigate, and that any adjudication on the matter could take up to three months. But earlier this week, LACNIC published a notice on its website that it intends to revoke 8,192 IPv4 addresses from DDoS-Guard — including the Internet address currently assigned to Parler[.]com. 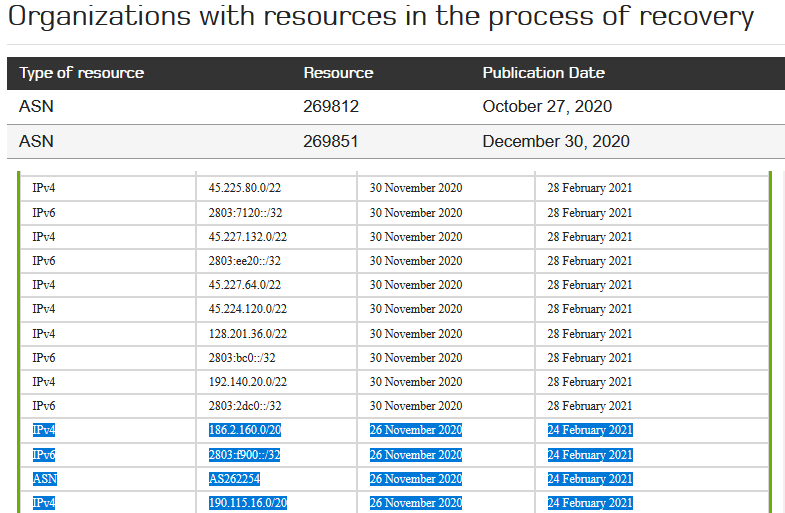 A notice of revocation posted by LACNIC.

LACNIC has not yet responded to requests for comment. The notice on its site says the Internet addresses are set to be revoked on Feb. 24.

DDoS-Guard CEO Evgeniy Marchenko maintains the company has done nothing wrong, and that DDoS-Guard does indeed have a presence in Belize.

“They were used strongly according [to] all LACNIC policies by [a] company legally substituted in LACNIC region,” Marchenko said in an email to KrebsOnSecurity. “There is nothing illegal or extremist. We have employers and representatives in different countries around the world because we are global service. And Latin America region is not an exception.”

Guilmette said DDoS-Guard could respond by simply moving Parler and other sites sitting in those address ranges to another part of its network. But he considers it a victory nonetheless that a regional Internet registry took his concerns seriously.

“It appeared to me that it was more probable than not that they got these 8,000+ IPv4 addresses by simply creating an arguably fraudulent shell company in Belize and then going cap in hand to LACNIC, claiming that they had a real presence in the Latin & South American region, and then asking for 8,000+ IPv4 addresses,” he said. “So I reported my suspicions to the LACNIC authorities in early November, and as I have only just recently learned, the LACNIC authorities followed up diligently on my report and, it seems, verified my suspicions.”

In October, KrebsOnSecurity covered another revelation by Guilmette about the same group of QAnon and 8chan-related sites that moved to DDoS-Guard: The companies that provided the Internet address space used by the sites were defunct businesses in the eyes of their respective U.S. state regulators. In other words, the American Registry for Internet Numbers (ARIN) — the non-profit which administers IP addresses for entities based in North America — was well within its contract rights to revoke the IP space.

Guilmette brought his findings to ARIN, which declined to act on the complaint and instead referred the matter to state investigatory agencies.

Still, Guilmette’s gadfly efforts to stir things up in the RIR community sometimes do pay off. For example, he spent nearly three years documenting how $50 million worth of the increasingly scarce IPv4 addresses were misappropriated from African companies to dodgy Internet marketing firms.

His complaints about those findings to the African Network Information Centre (AFRINIC) resulted in an investigation that led to the termination of a top AFRINIC executive, who was found to have quietly sold many of the address blocks for personal gain to marketers based in Europe, Asia and elsewhere.

And this week, AFRINIC took the unusual step of officially documenting the extent of the damage wrought by its former employee, and revoking discrete chunks of address space currently being used by marketing firms.

In a detailed report released today (PDF), AFRNIC said its investigation revealed more than 2.3 million IPv4 addresses were “without any lawful authority, misappropriated from AFRINIC’s pool of resources and attributed to organizations without any justification.”

AFRINIC said it began its inquiry in earnest back in March 2019, when it received an application by the U.S. Federal Bureau of Investigation (FBI) about “certain suspicious activities regarding several IPv4 address blocks which it held.” So far, AFRNINIC said it has reclaimed roughly half of the wayward IP address blocks, with the remainder “yet to be reclaimed due to ongoing due diligence.”

from Krebs on Security https://ift.tt/3qzvrSq