John Bernard, a pseudonym used by a convicted thief and con artist named John Clifton Davies who’s fleeced dozens of technology startups out of an estimated $30 million, appears to have reinvented himself again after being exposed in a recent investigative series published here. Sources tell KrebsOnSecurity that Davies/Bernard is now posing as John Cavendish and head of a new “private office” called Hempton Business Management LLP.

John Davies is a U.K. man who absconded from justice before being convicted on multiple counts of fraud in 2015. Prior to his conviction, Davies served 16 months in jail before being cleared of murdering his wife on their honeymoon in India.

Davies’ fraud convictions stemmed from a series of U.K. companies he set up supposedly to help troubled companies reorganize their debt and turn things around. Davies ended up looting what little money his clients had left and spending it on lavish cars, home furnishings, vacations and luxury watches.

In a three-part series published last year, KrebsOnSecurity exposed how Davies — wanted by authorities in the U.K. — had fled the country, taken on the surname Bernard, remarried, and moved to his new (and fourth) wife’s hometown in Ukraine.

The scam artist John Bernard (left) in a recent Zoom call, and a photo of John Clifton Davies from 2015.

After eluding justice in the U.K., Davies reinvented himself as The Private Office of John Bernard, pretending to be a billionaire Swiss investor who made his fortunes in the dot-com boom 20 years ago and who was seeking private equity investment opportunities.

In case after case, Bernard would promise to invest millions in hi-tech startups, only to insist that companies pay tens of thousands of dollars worth of due diligence fees up front. However, the due diligence company he insisted on using — another Swiss firm called Inside Knowledge — also was secretly owned by Bernard, who would invariably pull out of the deal after receiving the due diligence money.

Bernard found a constant stream of new marks by offering extraordinarily generous finders fees to investment brokers who could introduce him to companies seeking an infusion of cash. Inside Knowledge and The Private Office both closed up shop not long after their exploits were detailed here late last year.

But it appears Davies has just assumed a new name. KrebsOnSecurity recently heard from an investment broker who previously represented multiple clients that got fleeced by Mr. Bernard/Davies over the years. That broker said he was blown away to hear Davies’ unique British accent on a recent call with a client that had been in investment talks with a Northern Ireland firm called Hempton Business Management.

This time, the source said, Davies was introduced by handlers on the call as John Cavendish.

“I just sat in on a call and John’s voice is unmistakable,” said the broker, who asked to remain anonymous. “He stumbled on the beginning of the call trying to remember which last name he was supposed to use. Immediately they go back to the standard script about the types of deals they are looking for. They want to be minority investors in private transactions and they are industry agnostic.  Their deal sizes are investments in the $5-20 million range, they prefer to not use big 4 firms for due diligence, and they have some smaller firms they use which are better suited for smaller investment deals.”

The source forwarded me some correspondence from Hempton Business Management, and I noticed it was sent from a Mariya Kulykova. This is interesting because Mr. Bernard’s personal assistant in Ukraine was a Mariya Kulikova (Ms. Kulikova deleted Bernard’s former companies from her LinkedIn profile shortly after last year’s series).

The company’s website says Hempton has been around since 2017, but the domain name was only registered in late November 2020. There is no information about who runs or owns the company on its site.

Hemptonllp[.]com was registered via Gandi, the same French registrar John Bernard/Davies has used over the years with his dozens of phantom companies.

Hempton Business Management’s only presence on LinkedIn appears to be a help wanted ad from a few weeks ago, for a marketing position at an office in Kyiv, Ukraine.

In response to an emailed request for comment on the apparent connections, Mr. Cavendish forwarded the message to a James Donohoe, who replied that he was the owner of Hempton. Donohoe said the domain was new because the company recently re-branded, although he declined to discuss the matter further.

“This sounds like an accusation of a big fraud?,” Donohoe wrote. “I have never had any dealings with a John Clifton Davies or John Bernard. You really are a cheeky little bugger aren’t you!”

Mr. Donohoe did not respond to further requests for comment.

Hempton appears to be part of a network of corporate facades designed to lead any investigators into a labyrinth of entities that exist only on paper. Hempton is what’s known as a “shelf corporation,” an aged or seasoned company that was formed but never used as a business. Shelf corporations are registered solely for the purposes of being resold to others at a later date. Simply put, their resale allows new enterprises to appear older, more established, and trusted.

“Perhaps the leading reason for acquiring an aged entity in general is credibility,” explains TBA & Associates, a company co-registered in the UK and New Zealand that has created hundreds of shelf companies for sale (PDF), including Hempton Business Management LLP in 2017.

“Business relationships are frequently influenced by the length of time a company has been in existence,” TBA continues. “This is often true when establishing financial and client/vendor relationships.” 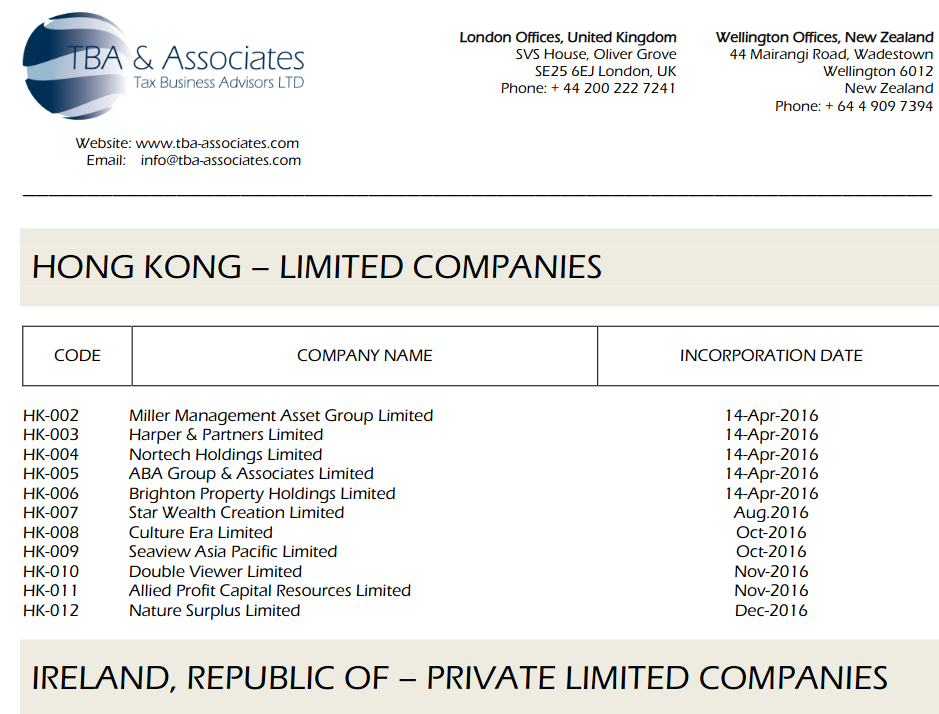 Some of the shelf companies created and sold by TBA & Associates.

Documents from the UK business record index Companies House show two entities as officers in Hempton: ABA Group & Associates LTD, and Harper & Partners Ltd. Both of these are shelf companies in Hong Kong that are listed for sale in the same TBA PDF advertisement linked for Hempton.

Searching Companies House for information on ABA Group and Harper & Partners leads to a dizzying number of other shelf companies in Hong Kong, Belize and the U.K. — all of which also were recently listed for sale by TBA.

The only person’s name attached to each of these companies is a Joaquim Magro de Almeida, a rather mysterious 72 year-old Portuguese business consultant. OpenCorporates says this same guy is an officer in 313 active companies. The U.K.’s Companies House lists Mr. Almeida as one of three officers in Euro Forex Investments Ltd., which Reuters says was a sprawling pyramid scheme that stole $1 billion from at least 3,700 victims in China, the United States and elsewhere.

This 2017 story from New Zealand financial news site interest.co.nz follows a trail of various other investment scams leading back to TBA shell companies, and to Mr. Almeida, too.

In my first report on John Davies, I noted that before becoming John Bernard he previously used the pseudonym “Jonathan Bibi” with an address in the offshore company haven of Seychelles. That identity was tied to a number of fraudulent cryptocurrency and binary options investment schemes.

Fraudsters are drawn to complexity, and they typically incorporate their shell or shelf companies in countries with little to no oversight or background checks tied to the creation and maintenance of corporate entities. As we’ve seen here, the U.K. is a favorite of fraudsters and money launderers worldwide. In a scathing 2017 report titled Hiding in Plain Sight (PDF), Transparency International found some 766 UK corporate vehicles were alleged to have been used in 52 large-scale corruption and money laundering cases approaching £80 billion.

from Krebs on Security https://ift.tt/3vTfPfp