A cybersecurity firm says it has intercepted a large, unique stolen data set containing the names, addresses, email addresses, phone numbers, Social Security Numbers and dates of birth on nearly 23 million Americans. The firm’s analysis of the data suggests it corresponds to current and former customers of AT&T. The telecommunications giant stopped short of saying the data wasn’t theirs, but it maintains the records do not appear to have come from its systems and may be tied to a previous data incident at another company.

Milwaukee-based cybersecurity consultancy Hold Security said it intercepted a 1.6 gigabyte compressed file on a popular dark web file-sharing site. The largest item in the archive is a 3.6 gigabyte file called “dbfull,” and it contains 28.5 million records, including 22.8 million unique email addresses and 23 million unique SSNs. There are no passwords in the database.

Hold Security founder Alex Holden said a number of patterns in the data suggest it relates to AT&T customers. For starters, email addresses ending in “att.net” accounted for 13.7 percent of all addresses in the database, with addresses from SBCGLobal.net and Bellsouth.net — both AT&T companies — making up another seven percent. In contrast, Gmail users made up more than 30 percent of the data set, with Yahoo addresses accounting for 24 percent. More than 10,000 entries in the database list “none@att.com” in the email field. 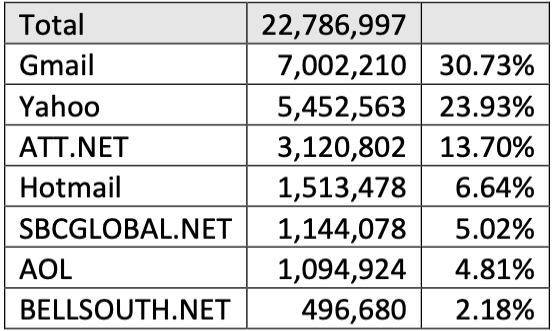 Hold Security found these email domains account for 87% of all domains in the data set. Nearly 21% belonged to AT&T customers.

Holden’s team also examined the number of email records that included an alias in the username portion of the email, and found 293 email addresses with plus addressing. Of those, 232 included an alias that indicated the customer had signed up at some AT&T property; 190 of the aliased email addresses were “+att@”; 42 were “+uverse@,” an oddly specific reference to a DirecTV/AT&T entity that included broadband Internet. In September 2016, AT&T rebranded U-verse as AT&T Internet.

According to its website, AT&T Internet is offered in 21 states, including Alabama, Arkansas, California, Florida, Georgia, Indiana, Kansas, Kentucky, Louisiana, Michigan, Missouri, Nevada, North Carolina, Ohio, Oklahoma, Tennessee, Texas and Wisconsin. Nearly all of the records in the database that contain a state designation corresponded to those 21 states; all other states made up just 1.64 percent of the records, Hold Security found. 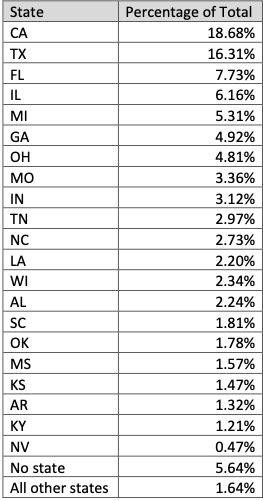 The vast majority of records in this database belong to consumers, but almost 13,000 of the entries are for corporate entities. Holden said 387 of those corporate names started with “ATT,” with various entries like “ATT PVT XLOW” appearing 81 times. And most of the addresses for these entities are AT&T corporate offices.

“Based on these statistics, we see that the last significant number of subscribers born in March of 2000,” Holden told KrebsOnSecurity, noting that AT&T requires new account holders to be 18 years of age or older. “Therefore, it makes sense that the dataset was likely created close to March of 2018.”

There was also this anomaly: Holden said one of his analysts is an AT&T customer with a 13-letter last name, and that her AT&T bill has always had the same unique misspelling of her surname (they added yet another letter). He said the analyst’s name is identically misspelled in this database.

KrebsOnSecurity shared the large data set with AT&T, as well as Hold Security’s analysis of it. AT&T ultimately declined to say whether all of the people in the database are or were at some point AT&T customers. The company said the data appears to be several years old, and that “it’s not immediately possible to determine the percentage that may be customers.”

“This information does not appear to have come from our systems,” AT&T said in a written statement. “It may be tied to a previous data incident at another company. It is unfortunate that data can continue to surface over several years on the dark web. However, customers often receive notices after such incidents, and advice for ID theft is consistent and can be found online.”

The company declined to elaborate on what they meant by “a previous data incident at another company.”

But it seems likely that this database is related to one that went up for sale on a hacker forum on August 19, 2021. That auction ran with the title “AT&T Database +70M (SSN/DOB),” and was offered by ShinyHunters, a well-known threat actor with a long history of compromising websites and developer repositories to steal credentials or API keys. 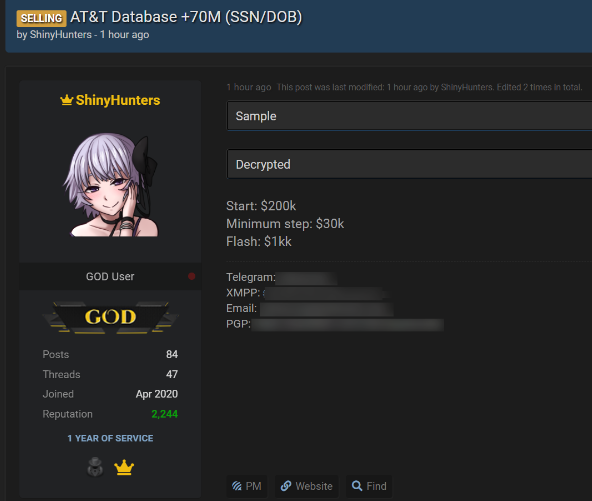 ShinyHunters established the starting price for the auction at $200,000, but set the “flash” or “buy it now” price at $1 million. The auction also included a small sampling of the stolen information, but that sample is no longer available. The hacker forum where the ShinyHunters sales thread existed was seized by the FBI in April, and its alleged administrator arrested.

But cached copies of the auction, as recorded by cyber intelligence firm Intel 471, show ShinyHunters received bids of up to $230,000 for the entire database before they suspended the sale.

“This thread has been deleted several times,” ShinyHunters wrote in their auction discussion on Sept. 6, 2021. “Therefore, the auction is suspended. AT&T will be available on WHM as soon as they accept new vendors.”

The WHM initialism was a reference to the White House Market, a dark web marketplace that shut down in October 2021.

“In many cases, when a database is not sold, ShinyHunters will release it for free on hacker forums,” wrote BleepingComputer’s Lawrence Abrams, who broke the news of the auction last year and confronted AT&T about the hackers’ claims.

“When asked whether the data may have come from a third-party partner, AT&T chose not to speculate,” Abrams wrote. “‘Given this information did not come from us, we can’t speculate on where it came from or whether it is valid,’” AT&T told BleepingComputer.

Asked to respond to AT&T’s denial, ShinyHunters told BleepingComputer at the time, “I don’t care if they don’t admit. I’m just selling.”

On June 1, 2022, a 21-year-old Frenchman was arrested in Morocco for allegedly being a member of ShinyHunters. Databreaches.net reports the defendant was arrested on an Interpol “Red Notice” at the request of a U.S. federal prosecutor from Washington state.

Databreaches.net suggests the warrant could be tied to a ShinyHunters theft in May 2020, when the group announced they had exfiltrated 500 GB of Microsoft’s source code from Microsoft’s private GitHub repositories.

“Researchers assess that Shiny Hunters gained access to roughly 1,200 private repositories around March 28, 2020, which have since been secured,” reads a May 2020 alert posted by the New Jersey Cybersecurity & Communications Integration Cell, a component within the New Jersey Office of Homeland Security and Preparedness.

“Though the breach was largely dismissed as insignificant, some images of the directory listing appear to contain source code for Azure, Office, and some Windows runtimes, and concerns have been raised regarding access to private API keys or passwords that may have been mistakenly included in some private repositories,” the alert continues. “Additionally, Shiny Hunters is flooding dark web marketplaces with breached databases.”

Last month, T-Mobile agreed to pay $350 million to settle a consolidated class action lawsuit over a breach in 2021 that affected 40 million current and former customers. The breach came to light on Aug. 16, 2021, when someone starting selling tens of millions of SSN/DOB records from T-Mobile on the same hacker forum where the ShinyHunters would post their auction for the claimed AT&T database just three days later.

T-Mobile has not disclosed many details about the “how” of last year’s breach, but it said the intruder(s) “leveraged their knowledge of technical systems, along with specialized tools and capabilities, to gain access to our testing environments and then used brute force attacks and other methods to make their way into other IT servers that included customer data.”

A sales thread tied to the stolen T-Mobile customer data.

from Krebs on Security https://ift.tt/13jq8IO